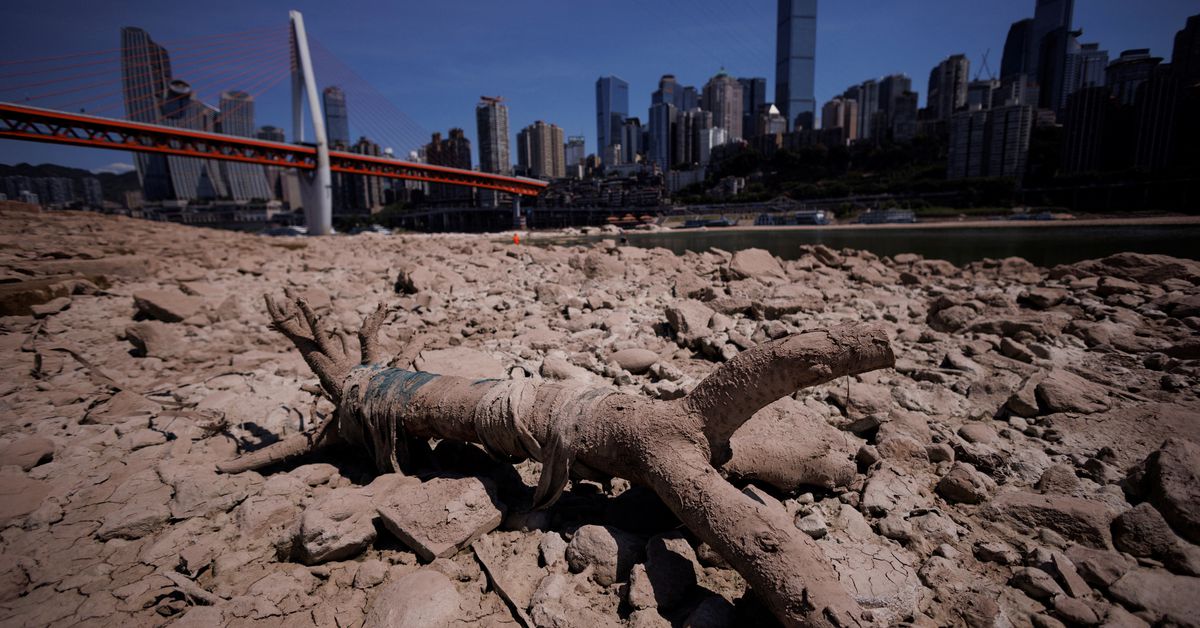 Yangtze tributary dries up as China faces another month of drought

CHONGQING/SHANGHAI, Aug 18 (Reuters) – Residents living near a tributary of the Yangtze River in the southwest region of Chongqing climbed along the dry river bed on Thursday amid an unprecedented drought in the region that could last another month.

“I’m actually quite worried because the water has been cut off at my property,” said Tian Feng, a 27-year-old resident who explores the riverbed.

“I originally planned to see if I could walk straight from here to the other side of the river,” she said. “Because the water there hasn’t dried up yet, I can’t cross.”

Although not completely dried up, dead fish were visible on the exposed plains of the Jialing, a long winding tributary that crosses three provinces before joining the Yangtze at Chongqing. Residents could safely reach a Qiansimen Bridge pier overlooking the river.

China warned on Wednesday that the severe drought along the Yangtze could last into September as local governments scramble to maintain electricity and find fresh water to irrigate crops ahead of the fall harvest.

Normal water flows in the region could be months away, with rainfall expected to remain low until the end of this month and beyond, Liu Zhiyu, an official with the Ministry of Water Resources, said during a briefing. a press briefing on Wednesday.

“It is expected that in September, the water supply in the middle and lower reaches of the Yangtze will still be weak, and the drought in Anhui, Hubei, Hunan and Jiangxi may develop further” , said Mr. Liu, referring to four major provinces of the Yangtze. middle course of the river.

The severe heat wave in the Yangtze basin, caused by a larger-than-usual subtropical anticyclone in the western Pacific, lasted more than two months, reducing hydropower supply and drying out large swaths of arable land. The river supports about a third of the country’s population.

Beijing has warned of the growing risk of extreme weather in China due to climate change, and heavy rains continue to wreak havoc in other parts of the country.

The Ministry of Finance said on Thursday it would make available 420 million yuan ($61.83 million) in emergency funds to help local governments provide flood and drought relief.

Chongqing, where most of the Yangtze Three Gorges reservoir is located, is trying to source electricity from other parts of the country as industry supplies are rationed, state media reported.

A tree trunk lies on the dry bed of the Jialing River, a tributary of the Yangtze, which is approaching record high water levels in Chongqing, China August 18, 2022. REUTERS/Thomas Peter

China’s State Grid has also pledged to do all it can to deliver power to neighboring Sichuan province, which normally supplies large amounts of excess hydroelectricity to the east but now imposes strict consumption controls.

Companies operating in Sichuan, including CATL, the world’s largest battery maker, and Japan’s Toyota (7203.T), have suspended production in the province due to the restrictions, according to media reports.

Rainfall in the Yangtze basin has been about 45 percent below normal since July, and high temperatures are expected to persist for at least a week, according to official forecasts.

Authorities in the region also said temperatures would continue to exceed 40 degrees Celsius (104 Fahrenheit) on Thursday, with parts of Chongqing expected to exceed 44 degrees.

Controlling water resources is seen as a crucial part of government in China as it tries to secure food supplies and secure another bumper harvest.

Rice and other fall crops are at a “critical period” for irrigation, Liu Weiping, vice minister of water resources, said at Wednesday’s briefing.

Water levels on the main stem of the Yangtze and the Dongting and Poyang flood basin lakes are now at least 4.85 meters (16 feet) shallower than normal, and the lowest on record for the period, officials said.

The drought has also highlighted the role played by the cascade of giant hydroelectric projects in regulating flows on the Yangtze.

Giant reservoirs upstream are opening to replenish storage levels at the Three Gorges Dam, which will release 830 million cubic meters downstream over the next few days.