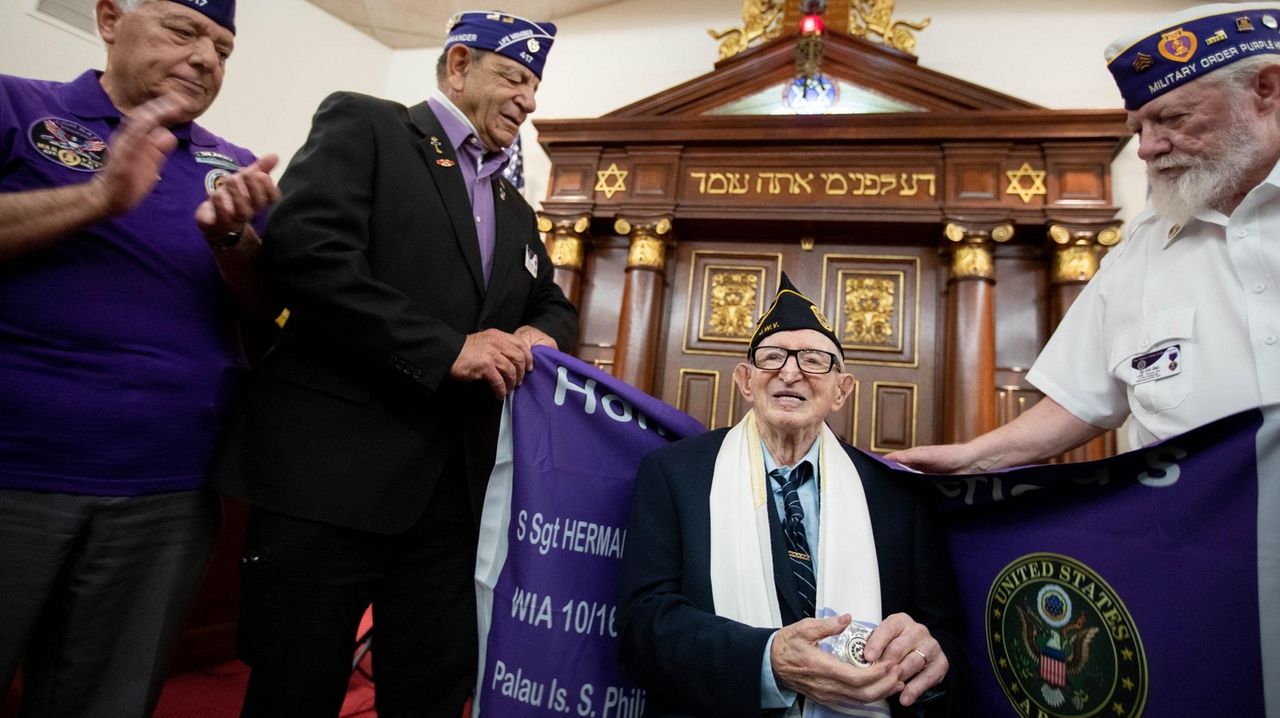 Soblick, speaking in a low, hissing voice, had a simple but profound reaction to the spotlight.

Raised in Brooklyn, Soblick said he joined the military when he was just a teenager. He served as a combat infantryman in the Pacific Islands. He was injured while serving on Angaur Island in the Western Pacific.

“I was hit by shrapnel,” he said, pointing to his neck and back. The injuries were not life-threatening, so he was dressed and sent back to the front, he said. He later received a Purple Heart for the injury.

Soblick, who left the service as a staff sergeant, added, “I earned my stripes in combat.”

Bob Chiappone, commander of the Military Order of the Purple Heart for Long Island, presented the flag.

“World War II veterans, there aren’t many left,” he said. “We are honored to be here. He is our hero.”

The ceremony was a proud moment for the congregation, said synagogue president Richard Krauss.

“He’s a man who served his country,” Krauss said. “We are honored to have a man like that.”

After the war, Soblick became an educator at the New York School of Printing, now known as the High School of Graphic Communication Arts. These days, his challenges are those that come with time and age. He is legally blind, has lost much of his hearing and wears a pacemaker, but still gets around with a red walker on wheels. He also has a 24-hour assistant, Winsome Callum.

Callum was by her side throughout the ceremony. When the vets draped the flag around her shoulders, she said she felt the tears welling up.

“Some days are good, some are not,” she said of her health. “Today is good.”

It wasn’t the first time the community had rallied around Soblick. Nassau County lawmakers named him “Senior Citizen of the Year” for 2012, citing his volunteer work with young and old.

Gary Glick, commander of the New York chapter of Jewish Veterans of the United States, recalled visiting Soblick a few years ago at his home. Soblick’s wife, Doris, had died in 2013.

Glick said the house was a mess. The ceiling tiles were collapsing. The refrigerator handle was taped in place. The cabinet doors came loose in his hand, he said.

“The house was a disaster. He wasn’t taken care of,” said Glick, who contacted the Rebuilding Together Long Island group, which helped fix the place.

Soblick, for her part, shared her thoughts on living a long life.

“I worked hard and was good with others,” he said.

Craig Schneider is from Long Island and an alumnus of Stony Brook University. He joined Newsday as a generalist reporter in January 2018 after 20 years at the Atlanta Journal-Constitution.