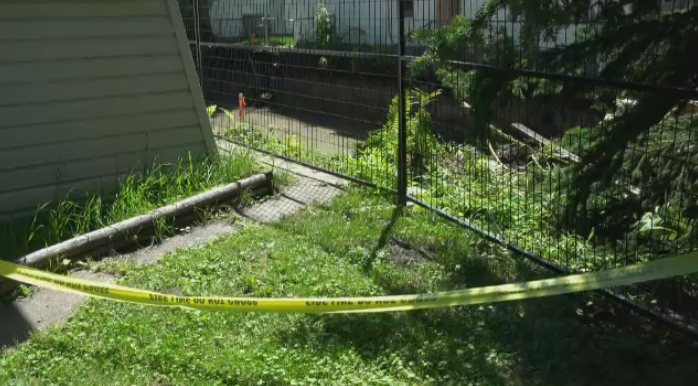 A 70-year-old woman had to be rescued and taken to hospital after falling into a construction hole next to her house.

Dave Hill says his mother was walking by his house on Tuesday afternoon when his sidewalk suddenly collapsed. The ground gave way and she fell into the hole.

He says she fell into the fence between the properties, several feet and into the hole filled with water.

“She screamed for help and luckily a lady dropped her daughter off, she called 911 and I believe paramedics were there in about 20 minutes,” Hill said.

She was taken to hospital in stable condition and returned home without major injuries.

“It was a normal walking path that’s why she used it and it obviously wasn’t safe,” Hill said.

He noted that they had not been contacted by construction companies and that his mother had not received any construction notices.

The hole has been there for about three weeks.

Hill says they weren’t told not to use their sidewalk and thinks a rain shower softened the ground.

Now – there is a second sidewalk fence bordering the opening and WFPS warning tape across the path entrance.

The City of Winnipeg says Occupational Health and Safety has been notified. CTV News contacted the demolition construction company. He declined to comment.

“Determining who is responsible is not necessarily an easy step,” said trial attorney Matthew Duffy.

The Pitblado Law partner says if there is a risk of injury, people need to be aware of it and be careful.

“There is a duty to warn. So that may include unstable caution concrete or be careful of that fence.”

Hill fears it could happen to someone else.

“If it happens again, it could result in serious injury or even death,” he said.

CTV News has contacted the City of Winnipeg for information on the safety measures needed for nearby properties during digging and whether the hole needs assistance if erosion is possible, but has not received a response.