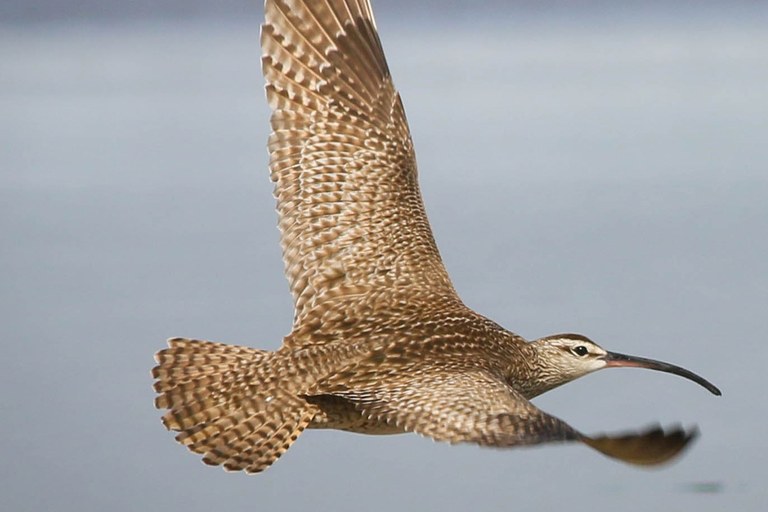 This story was originally posted by The last word on nothing and is republished here with permission.

They were dark shapes scattered along the beach. One here, three there, a pair just beyond them. Their large size sets them apart from other shorebirds, drawing our attention.

“What are they?” my dad asked.

We were in Fort Stevens, a few miles from Astoria, my hometown. My two younger sisters walked in front of us, bundled up against the mid-May cold. The wind was strong and relentless, and a thick blanket of clouds compressed the sky against the crashing waves of the Pacific. We were the only ones on the beach as far as I know.

My mother had passed away two days earlier from a sudden and unexpected illness. I had last seen her on Mother’s Day. When I told her I would be back next week – now it turned out to be – she smiled weakly. Looking back, I wondered if I should have taken this as a sign. She was old, but not that old, at least I thought so; similarly, I’m old, but not that old, at least when it comes to losing a parent.

“What makes a whimbrel a cortege?” My father asked.

â€œMy God,â€ I said. “So many things.” An overall greyish-brown appearance, but feathers which, on close examination, reveal their own vivid patterns. A wingspan of 30 to 32 inches, with a shiny white shaft on the outer primary. Long legs. A gracefully curved bill. All of these things, while technically correct, seemed insufficient, of course. What is it that does anything? A body, a breath, a beating heart.

What is it that does anything? A body, a breath, a beating heart.

We had spent a good part of the day rummaging through my mother’s things: clothes, books, all the junk she had amassed in her life. My sisters were tender but without feelings in their sorting. Full bags that we stacked in the room where mom died. Those on the right went to the landfill, those on the left to Goodwill. I made several trips to both places, and once they closed I ate dinner and drove us all to the beach. Mom liked to walk on the beach, but so did a lot of people.

Among the curlews were western sandpipers, sandpipers, snipe, black-bellied plovers. All were on their way north for the summer, but they were the laggards, the main migratory impetus having already shifted. Rather than thousands if not tens of thousands of birds thick on the sand and frantically stuffing themselves, we were only treated to a handful of small flocks. On the deserted beach, I felt the absence of these crowds, here just a week earlier.

Living on the Oregon coast like my parents do is to see most shorebirds only in passing, but a few summers before I had visited curlews on their breeding grounds in Alaska. Each pair claimed a vast territory of tundra, and on this dazzling area, the female would lay her perfectly camouflaged eggs. I desperately wanted to find one of their nests, but the curlews are so fearful and alert that the moment a bird or its mate saw me, they both took to the air and shouted in alarm: quiquiquiqui! They circled above my head, calling and calling, refusing to land until I left. In two weeks, I haven’t found a single nest.

Sometimes as I struggled with my grief after my sister called me with the news, I caught myself thinking Alright I learned all I want to learn from this, mama can come back now. But other times, like at Fort Stevens with my family, I have felt a dull, almost eerie calm. My dad and I stopped to watch a crow sucking a sand worm like a spaghetti strand. So that’s how it will be, I was thinking. Day after day after day without a mother until I get used to it.

Curlews breed in the northernmost parts of the northern hemisphere. Their name in English is a rough approximation of their voice. A sort of curlew, they were like other curlews considered to be harbingers of death, their call reminiscent of the cries of the dead. But there are other readings. In The birds of the wind, Peter Matthiessen writes: “Yet it is not the sign of death that curlews bring, but only the memory of life, of great beauty which passes quickly, as the curlew passes, leaving us in the dark. loneliness on an empty beachâ€¦ â€

I don’t think my mom ever read this book, but I know she would have liked it if she had.

We had traveled a kilometer or more when I saw a curlew procession leaving by itself at the seaside. A film of water on the sand made a mirror for the clouds in the sky, and the blue monochrome -gris gave the scene a feeling of infinite recursion, of sea â€‹â€‹sky sea sky sea sky, and in the center stood the dark tip of the one bird. I broke away from my father and walked towards him, trying to transform him into my mother, his spirit, a message from her, aware of the acuteness of my desire pressing against his thresholds of well-being. individual. I tried to reach for it with all my heart, but then I got too close and the spell broke, the whimbrel leapt up, screaming and soaring low above the water until that he can land at a certain distance, closer to his own.

Eric Wagner lives in Seattle with his family. His book After the explosion: the ecological recovery of Mount St. Helens was released in 2020.
E-mail High Country News at [emailÂ protected] or submit a letter to the editor.

Washington County fire company did not respond to audit request