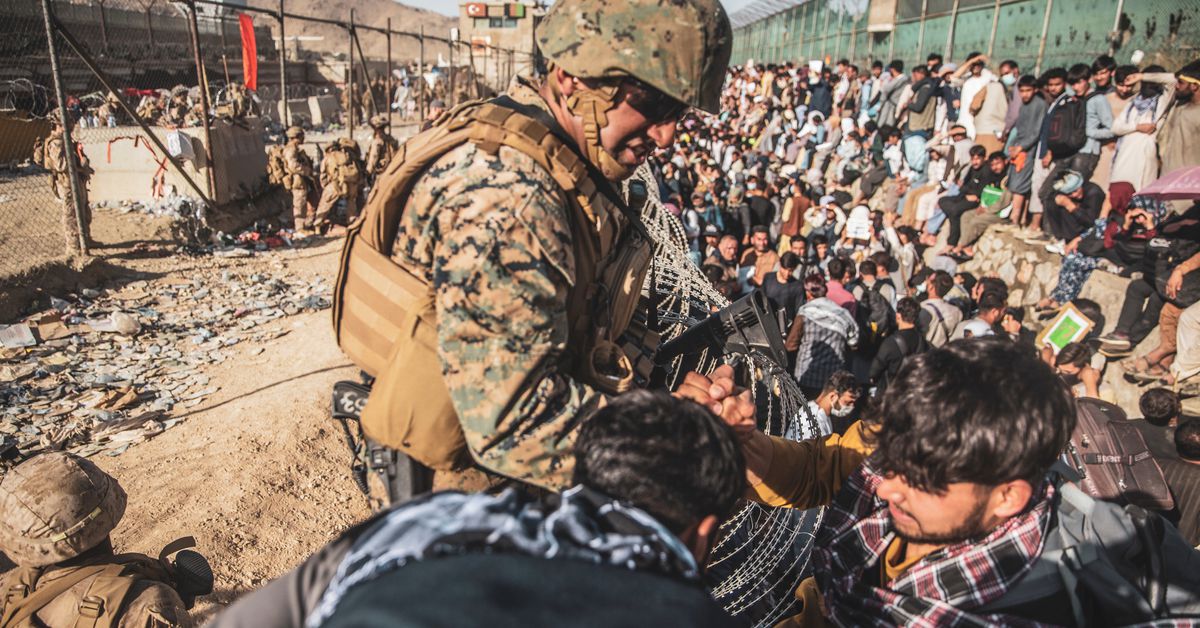 Aug. 27 (Reuters) – US forces helping to evacuate Afghans desperate to flee the Taliban regime were on alert Friday for further attacks after an Islamic State suicide bombing outside Kabul airport killed at least 92 people, including 13 US servicemen.

The White House has said the next few days of an ongoing US evacuation operation, which the Pentagon says has brought about 111,000 people out of Afghanistan in the past two weeks, will likely be the most dangerous.

Pentagon spokesman John Kirby said the United States believed there were still “specific and credible” threats to the airport after the bombing at one of its gates.

“We are certainly prepared and look forward to future attempts,” Kirby told reporters in Washington. “We are monitoring these threats, very, very specifically, virtually in real time.”

US and Allied forces are rushing to complete evacuations of their citizens and vulnerable Afghans and to withdraw from Afghanistan before the August 31 deadline set by President Joe Biden after two decades of US military presence there.

About 4,200 people were evacuated from Kabul over a 12-hour period on Friday, the White House said. Earlier today, US officials said a total of about 5,100 Americans had been evacuated, with about 500 more waiting to leave.

Although thousands of people have been evacuated, they are far fewer in number than those who were unable to get out.

Some US media, including the New York Times, quoted local health officials as saying that up to 170 people, not including US troops, were killed in Thursday’s attack.

Crowds of people have gathered outside the airport to try to board evacuation flights since the Taliban took control of Afghanistan on August 15. The attack was the deadliest incident for US troops in Afghanistan in a decade.

Taliban forces have taken up positions at Kabul airport and are ready to take full control as soon as the US forces leave this weekend, two senior Taliban officials said. A senior commander said that the Taliban forces had taken control of most of the airport, “but not a small part where the Americans are still.”

“As soon as the Americans leave, they just have to give us the signal and then we will take over,” said a second Taliban official.

Kirby disputed the Taliban account, telling reporters that the military section of the airport remained under US control.

The United States expects continued engagement with the Taliban will be needed after the pullout to facilitate further evacuations, White House press secretary Jen Psaki said.

“The reality is that the Taliban control large swathes of Afghanistan, including the areas around the perimeter of the airport,” she told reporters. “So out of necessity, this is our option.”

The Islamic State (ISIS), an enemy of the Islamist Taliban as well as the West, claimed responsibility for the attack, which the Pentagon said on Friday was carried out by a suicide bomber at the door of an airport, and not two as he indicated earlier.

The number of Afghans killed rose to 79, a hospital official told Reuters on Friday, adding that more than 120 were injured. A Taliban official said the dead included 28 Taliban members, although a spokesperson later denied that such fighters were killed.

The attack underscored the realpolitik facing Western powers in Afghanistan: engaging with the Taliban forces they have long been fighting may be their best chance to prevent the country from becoming a breeding ground for Islamist militancy.

The United Nations Security Council condemned the bombing as “particularly heinous” for targeting civilians trying to flee the country.

Biden said Thursday he ordered the Pentagon to plan how to strike ISIS-K, the Islamic State affiliate who has claimed responsibility. When asked on Friday if Biden is seeking to capture and bring those responsible to justice, Psaki said “I think he made it clear yesterday that he does not want them to live on earth anymore.”

Biden was already facing strong criticism at home and abroad for the chaos surrounding the troop withdrawal and evacuations. As the Taliban advanced rapidly towards Kabul amid the withdrawal, the West-backed Afghan government and army collapsed. Biden defended his decisions, saying the United States had long reached its justification for invading the country in 2001.

The US-led invasion overthrew the then-ruling Taliban, punishing them for harboring Al Qaeda militants who organized the September 11 attacks on the United States that year.

Most of the more than 20 allied countries involved in airlifting Afghans and their own citizens out of Kabul said they completed the evacuations on Friday.

The Taliban have said Afghans with valid documents will be able to travel freely in the future at any time – comments aimed at allaying fears the move has severe restrictions.

Taliban guards blocked access to the airport on Friday, witnesses said. “We had a theft but the situation is very difficult and the roads are blocked,” said a man on an access road.

Medical supplies will run out in days in Afghanistan, the World Health Organization said, adding that it hopes to establish an airlift to the northern city of Mazar-i-Sharif with help. from Pakistan.

Up to half a million Afghans could flee their homelands by the end of the year, the UN refugee agency UNHCR said, calling on all neighboring countries to keep their borders open.

There are also growing concerns that Afghans face a humanitarian emergency with the spread of the coronavirus and looming shortages of food and medical supplies.

The Taliban have called on all female healthcare workers to return to work, a spokesperson said, as trained and educated Afghans flee the country.