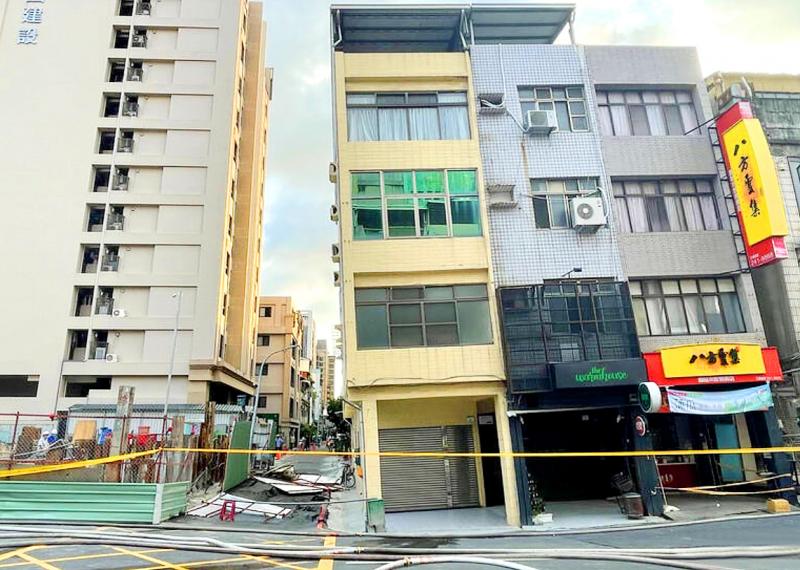 A developer yesterday apologized and promised to cover rental costs for those affected after a company-supervised construction site in Kaohsiung caused the surrounding roads to partially collapse, endangering the safety of seven buildings.

Sunday’s collapse was the second such incident in less than six months at the site run by Tungchin Yusuo (東金御所) on Zihciang First Road in Cianjin District (前金), after a pressure imbalance of water in March caused surrounding roads to collapse.

The company said at the time that it had repaired the damage, but on Sunday afternoon the surrounding roads collapsed further.

The collapse affected seven nearby buildings, three of which were visibly tilted.

Twenty people in seven households were evacuated and relocated to temporary accommodation.

During an initial inspection on Sunday, the Kaohsiung Public Works Bureau and consultants determined that the metal sheets covering the retaining walls were not completely sealed, causing water and sand to leak, lowering the ground level. surrounding.

The office designated the seven buildings concerned as dangerous zones, imposed a fine of NT$90,000 on the contractor and the supervisor and ordered a stop to construction.

The area has been placed under strict emergency rules with 24-hour surveillance.

Kaohsiung Deputy Mayor Charles Lin (林欽榮) said yesterday that water pressure stabilized on Sunday after more than 5,000 tons of water was pumped into the ground.

Hourly measurements of the three tilted buildings also show that their angles have not changed, meaning they are not at immediate risk of collapse, he added.

Lu Yan-lung (呂彥龍), vice president of the Association of Professional Geotechnical Engineers of Taiwan, said Cianjin District is built on soft sediments, while the construction site is near the estuary of the Love River (愛河).

During a meeting with city officials and concerned residents yesterday, a company representative surnamed Kuo (郭) apologized and pledged to cover all household rental costs.

Kuo also promised that the company would take full responsibility for the incident and repair the damaged roads once the ground stabilized.

Regarding the seven affected buildings, Kuo said the company would support the owners’ decision whether to rebuild in the same location or sell the plots to the company.

Several residents present at the meeting said they would prefer reconstruction, although further negotiations are needed.

The bureau said communication channels have been established between all interested parties.

The Kaohsiung Architects Association has also been appointed to help residents assess and apply for compensation, he added.

Comments will be moderated. Keep comments relevant to the article. Remarks containing abusive and obscene language, personal attacks of any kind or promotion will be removed and the user banned. The final decision will be at the discretion of The Taipei Times.