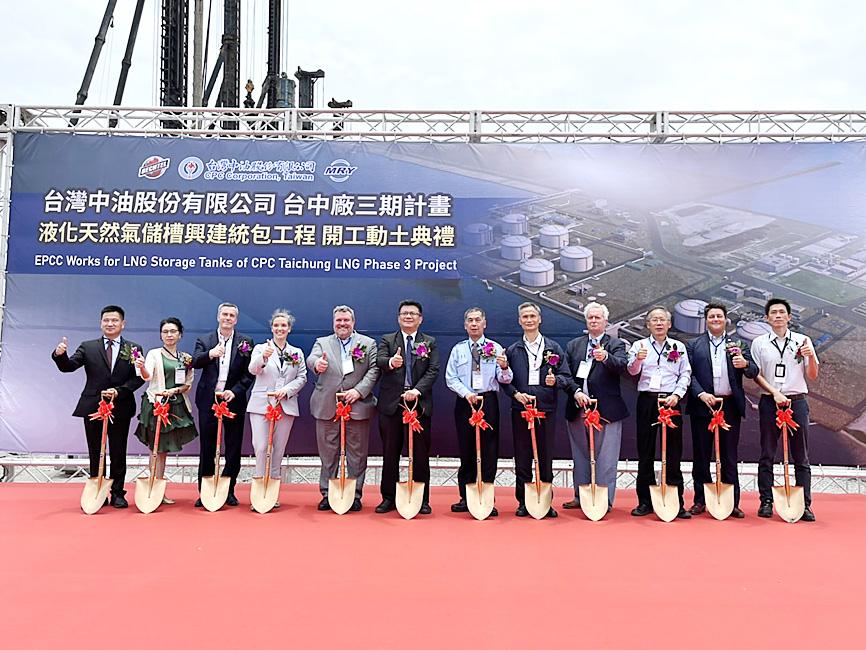 The project, which is part of Phase 3 of CPC’s Taichung LNG receiving terminal expansion, is expected to be completed in 2026 and is expected to increase the company’s annual supply capacity by up to 10 million tons at its Taichung factory.

Once completed, the two 180 million liter LNG storage tanks would give CPC the ability to supply LNG to power generation facilities and industrial users in central and northern Taiwan, the state-owned oil company said. .

The ceremony took place in the presence of the president of the CPC, Lee Shun-chin (李順欽), and the director of the American Institute of Taiwan (AIT), Sandra Oudkirk.

Oudkirk said the AIT supports Taiwan’s goal of shifting from coal-fired power to cleaner energy, adding that US energy and technology companies will help achieve those goals.

The American construction company Bechtel Corp is leading the project.

Separately, CPC announced Wednesday that it will repair corroded chambers used in the construction of its LNG import terminal in Taoyuan.

The watertight structures, called caissons, facilitated underwater construction in the port for an LNG project in the Guantang (觀塘工業區) Industrial Park in the Guanyin (觀音) district of the city.

Corrosion was observed on many of the 16 caissons, including concrete spalling and exposed steel bars, CPC said in a statement.

The problems were caused by “collision forces” as the caissons were towed to the Taoyuan construction site, and later as they were sunk into the seabed, CPC said.

A coalition of environmental groups called Rescue Datan’s Algal Reefs Alliance pointed to the corrosion, saying the damage indicated the structures’ compressive strength was below standard.

Exposed steel bars and portions of cement falling from the caissons could harm the ecosystem, the alliance said.

He asked CPC to replace the corroded caissons with an environmentally friendly construction method to ensure the safety of LNG facilities and avoid damage to the seabed.

CPC denied that the caissons were substandard, saying they were inspected after construction by Pan Asia Corp (泛亞工程) and Hwang Chang General Contractor Co (皇昌營造) of Taiwan and Dredging International NV, based in Belgium.

CPC also said the caissons were safe to repair rather than replace.

A third party conducted a compressive strength assessment and concluded that their load bearing capacity is above standard, the CPC said.

Repairs should be carried out in accordance with methods recommended by a third party and subject to further inspection by the Association of Hydraulic Engineers to ensure the integrity of the caissons, he said.

Comments will be moderated. Keep comments relevant to the article. Remarks containing abusive and obscene language, personal attacks of any kind or promotion will be removed and the user banned. The final decision will be at the discretion of The Taipei Times.