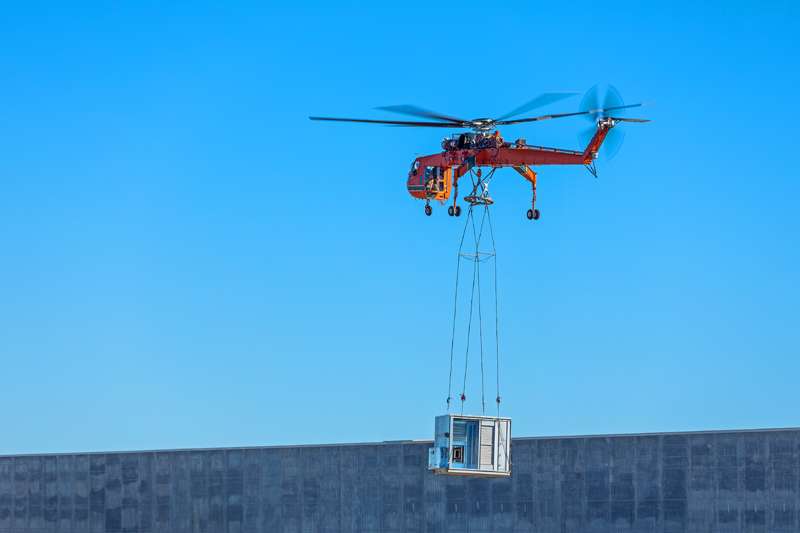 Schwan’s pizza factory in Kan. uses helicopters in the installation of HVAC units

SALINA – Schwan’s company and construction crews used an unconventional method to install their air conditioning systems on the new extension of their pizza factory in Salina.

On Saturday and Sunday, they used helicopters to lift more than 50 heating, ventilation and air conditioning (HVAC) units onto the roof of the new facility, according to a press release from the company.

“Due to the size of the building and the HVAC units, the use of helicopters was the safest and most efficient way to install the units,” said Chris Wiseman, senior manufacturing manager of Salina, adding that on small projects, cranes would be used.

The HVAC units, some weighing more than 17,000 pounds, will be used for heating, cooling and humidity control of the facility.

The HVAC installation is part of the 400,000 square foot expansion of the existing pizza factory. Schwan’s Company, a leading food producer in the United States, announced the expansion plan in August 2020. Construction on the facility began in September 2020 and will continue through 2022. Schwan’s plans to manufacture pizza in the new expansion by the end of next year. .

The expansion, which is part of a major investment in Salina, will include state-of-the-art automated pizza production lines, shipping and receiving docks and offices. The company already employs approximately 1,000 people at its current 550,000 square foot production plant and distribution center in Salina. Burns & McDonnell, a 100% employee-owned engineering, architecture and construction company, designs and builds the expansion.

To operate the highly automated facility with state-of-the-art production lines and equipment, Schwan’s is creating 225 full-time jobs in the Salina area. Many of these new jobs will be better paid and will require a high level of technical expertise.

Some of the roles will include electrical control engineers and process engineers. Experts in production, packaging and baking operations, as well as managerial positions are also required.

“A state-of-the-art facility with the latest equipment and the most modern technology will require employees who can operate, maintain and ensure the reliability of the equipment they use every day.” , said Wiseman.

“These positions are unlike any other we have at Schwan’s, and unlike most in the food industry,” he added.

Schwan’s began hiring for these positions earlier this year and will continue to hire until 2022. Position details are available on SchwansJobs.com.