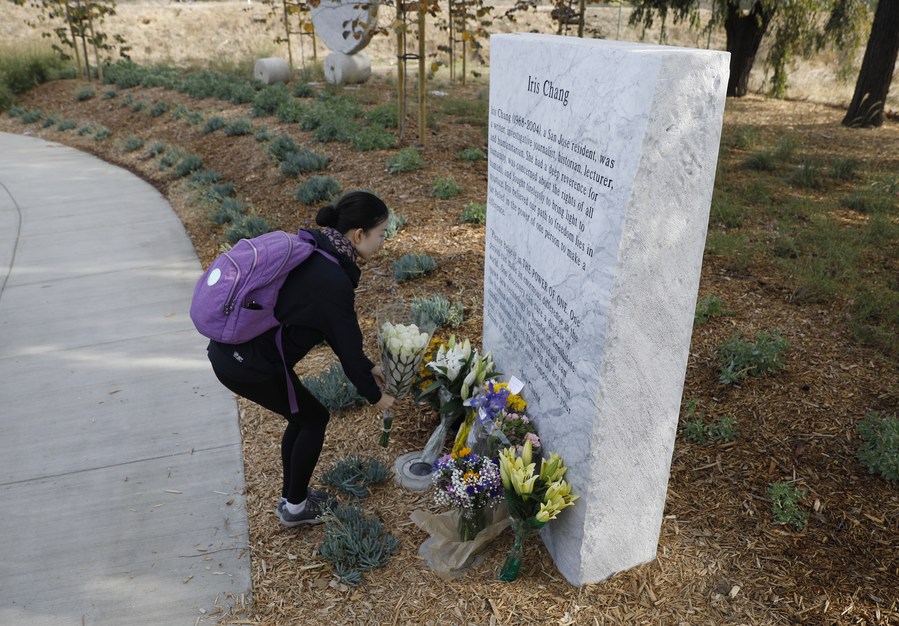 Video: The city of San Jose in California, United States, on November 9, 2019 unveiled a memorial park named after the late Chinese-American writer Iris Chang, known for her book on the history of the Second World War including the Japanese invasion of China. (Xinhua)

By helping to make the Nanjing Massacre widely known in Western societies, Iris Chang made an invaluable contribution.

SAN FRANCISCO, Aug. 22 (Xinhua) — The San Francisco WWII Pacific War Memorial Hall has set up a reading room to commemorate the late Chinese-American writer Iris Chang, renowned for her books on history, including the Japanese invasion of China.

Chang, whose Chinese name was Zhang Chunru, was the author of “The Rape of Nanking: The Forgotten Holocaust of World War II”, a bestseller published in 1997.

With the book, she brought to light the horrific atrocities known as the “Nanjing Massacre”, committed by invading Japanese troops in the city of Nanjing in eastern China in 1937.

The reading room on the third floor of the Memorial Hall is called “The Power of One”.

“Please believe in the power of one. One person can make a huge difference in the world. One person – in fact, one idea – can start a war or end it,” said Jennifer Cheung, President of the World Alliance for the Preservation of History. of World War II in Asia, said at Saturday’s opening ceremony, quoting Chang’s words.

“She is one of the most respected women for us,” said Florence Fang, a Chinese-American community leader in the San Francisco Bay Area and also the memorial’s founder.

A visitor presents a bouquet of flowers in front of a tablet inscribed with an introduction by Iris Chang at a memorial park named after the late Chinese-American writer in San Jose, California, U.S. November 9, 2019. (Photo by Li Jianguo/Xinhua)

The Japanese invasion of China, a chapter of history written in blood and tears, must always be remembered, Fang said, noting that was her original intention when she donated the money to build the memorial hall seven years ago.

Opened on August 15, 2015, the 70th anniversary of Japan’s unconditional surrender in World War II, the memorial is the first of its kind outside China to commemorate the Chinese Resistance War against Japanese aggression.

The Western world has often overlooked Chinese contributions and sacrifices during World War II. Iris Chang once said that “the whole story of the comfort women, the system of forced sexual slavery, the medical experiments of Unit 731, is not something that is in the American psyche”, but she thought awareness was growing.

Since its opening, the Memorial Hall has provided local residents and visitors from around the world with a unique opportunity to learn about the history of China’s War of Resistance Against Japanese Aggression and Sino-American collaborations during World War II. .

By helping to make the Nanjing Massacre widely known in Western societies, Iris Chang made an invaluable contribution, Cheung said. “I hope I can be a footprint behind her, and I also hope that we have more footprints behind us, all true to Chang’s belief.”

Overseas Chinese from all walks of life in the San Francisco Bay Area have held the annual Nanjing Massacre memorial event for 25 consecutive years, Cheung said.

“We mourn the passing compatriots who were massacred by the Japanese invaders,” Cheung said. “We call on all human beings to remember the lessons of dark history and contribute to lasting world peace.” ■