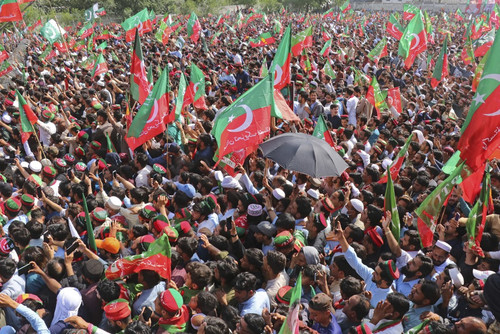 Attacks on Pakistani media workers continue to escalate, with senior journalist Zia-Ur-Rehman Farooqi fatally attacked by “land grabbers” in Punjab province, and veteran journalist Khawar Mughal tortured by members of the political party Pakistan Tehreek e Insaf (PTI). party at a public meeting in Lahore. The International Federation of Journalists (IFJ) and its Pakistani affiliate, the Pakistan Federal Union of Journalists (PFUJ), condemn the attacks and urge the newly formed Pakistani government to apprehend the perpetrators and put in place security mechanisms to better protect journalists in Pakistan.

According to the First Information Report (FIR) filed on March 24 at Kuhna police station in Khanewal, several assailants stopped and threatened a car carrying journalists, including Zia-Ur-Rehman Farooqi, a correspondent for 7 News in the district. from Khanewal in Punjab.

Armed individuals opened fire on the journalists, hitting Zia-Ur-Rehman in the head. The other journalists present in the car managed to escape unscathed, while the assailants fled. Zia-Ur-Rehman was taken to Khanewal District Headquarters Hospital, before being transferred to Nishtar Hospital in Multan for further treatment. The journalist died of his injuries on April 28.

Zia-Ur-Rehman has reportedly come under attack for his critical reporting on land grab plans in the region, with the FIR filed under Section 7 of Pakistan’s Anti-Terrorism Act and the country’s penal code.

In another incident, well-known journalist Khawar Mughal of 92 News was torture at a public rally in Lahore by members of the political party PTI. An FIR has been filed at Lari Addah Lahore Police Station against Mughal assailants, who tortured him before stealing his media company logo and breaking his microphone and camera.

At public PTI events in Islamabad and Karachi, journalists have been tortured and female journalists, including Samaa TV’s Zamzam Saeed, have been subjected to targeted harassment.

Gharida Farooqi, a prominent journalist and presenter, has been harassed by PTI members on social media and through online assaults, cyberbullying, defamation, and death and rape threats.

“I reported to the FIA ​​about rude, harassing and derogatory banners directed at me at the public meeting in Lahore and posted on social media,” Farooqi told IFJ. “From now on, there will be no tolerance. Anyone who spreads false information about me will now be reported to the FIA. I expect the FIA ​​to take swift action against all perpetrators. “

The PFUJ strongly condemned the armed attack on journalist Zia-Ur-Rehman Farooqi and called on the Punjab police to arrest and detain the culprits. Rana Muhammad Azeem, general secretary of the PFUJ, demanded that the perpetrators be arrested or a nationwide protest would be called.

The IFJ said: “The Pakistani government must take effective measures to ensure the safety and security of journalists so that they can carry out their professional duties without fear. The IFJ urges the Pakistani authorities to protect journalists in the country and to fulfill their international duties under the Pakistani Constitution regarding media and freedom of the press.