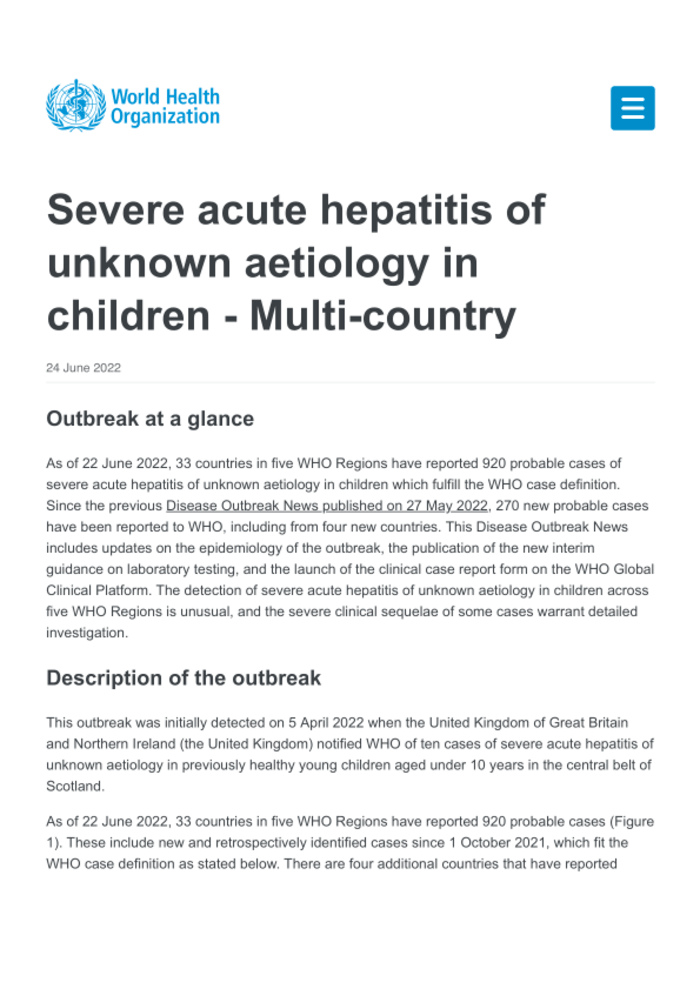 Hatching at a glance

As of 22 June 2022, 33 countries in five WHO regions have reported 920 probable cases of severe acute hepatitis of unknown etiology in children who meet the WHO case definition. Since the previous Epidemic news published on May 27, 2022, 270 new probable cases have been reported to WHO, including four new countries. This outbreak newsletter includes updates on the epidemiology of the outbreak, the release of the new interim laboratory testing guidelines and the launch of the clinical case report form on the global clinical platform of the WHO. The detection of severe acute hepatitis of unknown etiology in children in the five WHO regions is unusual and the serious clinical sequelae of some cases warrant further investigation.

Description of the outbreak

This outbreak was initially detected on 5 April 2022 when the United Kingdom of Great Britain and Northern Ireland (United Kingdom) notified WHO of ten cases of severe acute hepatitis of unknown etiology in young people previously healthy children under 10 in the central belt of Scotland.

As of 22 June 2022, 33 countries from five WHO regions had reported 920 probable cases (Figure 1). These include new and retrospectively identified cases since October 1, 2021, which meet the WHO case definition, as shown below. Four additional countries have reported cases awaiting classification and are not included in the cumulative number of probable cases. Of the probable cases, 45 (5%) children required transplantation and 18 (2%) deaths were reported to WHO.

Half of the reported probable cases were reported in the WHO European Region (20 countries reporting 460 cases), including 267 cases (29% of global cases) in the United Kingdom (Table 1, Figure 2). The second highest number of probable cases was reported in the Region of the Americas (n=383, including 305 cases in the United States of America), followed by the Western Pacific Region (n=61), the Region of Southeast Asia (n=14) and Eastern Mediterranean Region (n=2). Seventeen countries are reporting more than five probable cases. The actual number of cases may be underestimated, in part due to the limited number of enhanced surveillance programs in place. The number of cases is expected to change as more information and verified data becomes available.

Based on the working case definition for probable cases (Box 1), laboratory tests excluded hepatitis AE viruses in these children. Other pathogens have been detected in a number of cases, although data reported to WHO is incomplete.

Of 100 probable cases for which clinical data are available, the most frequently reported symptoms were nausea or vomiting (54% of cases), jaundice (49% of cases), general weakness (45% of cases) and abdominal pain (45% of cases). ).

Epidemiological, clinical, laboratory, histopathological and toxicological investigations into the possible etiology (or etiologies) of the cases are underway by several national authorities, research networks, in different WHO working groups and with partners. This includes detailed epidemiological investigations to identify common exposures, risk factors or links between cases. Additional investigations are also planned to determine where the number of detected cases is above expected baseline levels.

The global risk is currently assessed as moderate based on the following factors:

WHO has developed interim guidance for Member States on testing considerations and strategies for suspected cases of severe acute hepatitis of unknown etiology in children. The guidance includes advice to help Member States prioritize diagnoses and can be modified to reflect regional considerations of endemic diseases. The guidelines also consider evaluations of other etiological factors known to cause severe acute hepatitis in children, including other infectious agents, environmental exposures (toxins, drugs), inherited metabolic conditions or autoimmune disorders, which should be considered in consultation with a pediatrician. hepatologist.

Priority should be given to the systematic collection of various specimens as soon as possible after the onset of symptoms, in order to allow later testing if necessary and to identify the etiology(ies). If laboratory capacity is limited, storage and transfer to regional or global laboratories should be considered for the suggested investigative diagnostics. Any positive sample should also be retained for further testing and/or investigation.

To further support Member States in laboratory testing, WHO is establishing a network of regional and global reference laboratories.

For more information, please see the Interim guidance on laboratory testing for severe acute hepatitis of unknown etiology in children.

Communication of clinical data through the WHO Global Clinical Platform

WHO has developed a Clinical Case Report Form (CRF) to facilitate reporting of anonymized case-based data. Analysis of standardized global clinical data will contribute to understanding the etiology as well as the clinical characterization of the disease, its natural history and severity; to guide the public health response and the development of clinical management guidance, including investigation approaches and infection prevention and control interventions. WHO strongly encourages Member States’ participation in the WHO Global Clinical Platform for all cases meeting the WHO case definition, even if the CRF cannot be fully completed. Patient clinical data may be collected prospectively or retrospectively through review and review of medical records.

The clinical CRF is accessible via the WHO Global Clinical Platform for Severe Acute Hepatitis of Unknown Etiology.

Basic data on the incidence of severe acute hepatitis of unknown etiology in countries outside the European Region remain scarce. Although voluntary, WHO encourages Member States to participate in the global survey by collecting aggregated data from different hospitals/centres in all regions, covering the last five years. This survey will help estimate baseline incidence and, importantly, where cases are occurring at higher than expected rates.

Until more is known about the etiology of these cases, WHO recommends the implementation of general infection prevention and control practices, including:

Healthcare facilities should adhere to Standard Precautions and implement Contact and Droplet Precautions for suspected or probable cases.