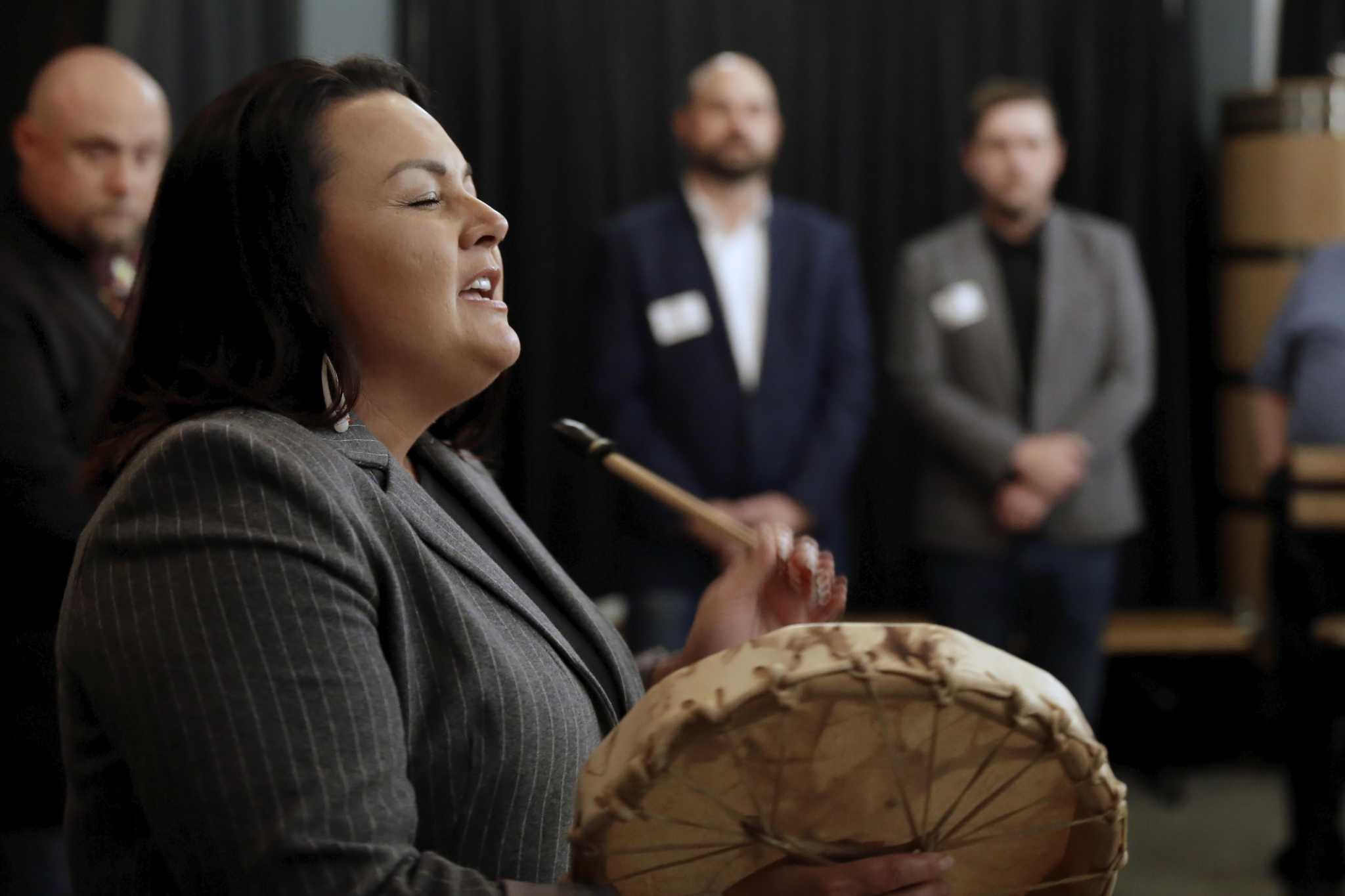 When Jake Donaldson helped launch a second location for his Houston business, Method Architecture in the Dallas area, he struggled to gain traction and expand his business.

â€œI didn’t know of a strong network of people for referrals,â€ said Donaldson, who is of Choctaw Nation descent. But after meeting Amanda Smith, founder and president of the Native American Business Association, things started to change.

Smith, 46, launched an exhibit in the Dallas-Forth Worth area in 2019, bringing together diverse indigenous tribes, higher education institutions, certification organizations and a diverse community of Texas business owners.

â€œIt instantly helped me feel more connected and gave me a kind of sense of belonging, like I wasn’t a stranger,â€ Donaldson said. Smith also referred him to the Federal Bureau of Indian Affairs, where he signed on to become one of five architectural firms in the country to work on projects for various tribes in the United States. He has since worked with tribes across the country, including his home community, the Choctaw Nation of Oklahoma, doing volunteer work and helping design buildings for Indigenous nonprofits and startups that integrate their tribal culture and history.

â€œAnyone who’s been in business for a long time knows that it all depends on relationships,â€ Donaldson said. â€œA lot of it doesn’t come from a cold approach; it comes from knowing people, directing people to things, and doing a good job to keep people coming back.

After joining the NABA Board of Directors, Donaldson helps launch the Houston Chapter of the National Association to advocate for Native American business owners and connect them with Native clients while providing educational opportunities. and networking to help advance their careers.

â€œIt’s focused on how to help Native American businesses thrive, network and grow,â€ Donaldson said. â€œWe want to help other business owners find a sense of belonging and community. “

The NABA chapter held its first meeting on Wednesday at a local brewery, opening with a recognition of tribal lands, thanks to the state and local tribes, and a drumming ceremony in honor of its veterans. About 30 people attended, including members of the Chevron Native American business group.

â€œOur tribes are not here – they may be in California, Louisiana, or Oklahoma – but we are here and we are important,â€ said Chad Johnson, Choctaw Nation member and owner of the Akana Group, an indigenous supplier. owned equipment.

NABA, which is headquartered in the Dallas-Fort Worth area, has around 100 members nationwide since its launch, and with a promising buzz around the Houston area chapter, Smith hopes to expand – further strengthening it. the presence of Native American Business Owners in Texas.

Smith founded her Forth Worth construction company, Mahuya Industries, in 2018. She decided to start NABA after noticing that there was no Native American Chamber of Commerce in Texas. The networking opportunities were slim. She connected with minority organizations and Hispanic and black entrepreneurs, but found that she needed a more tailored fit, given the unique obstacles that Native American business owners may face.

On HoustonChronicle.com: Native American history in South Africa is 15,000 years old and

For some, the certification process can be so overwhelming that they give up, Smith said.

Tribal-owned businesses often go through a rigorous process, with additional requirements and documentation needed to prove the owner is from one of the 574 federally recognized indigenous tribes in the country. In Texas, only three tribes are recognized at the federal level: the Alabama-Coushatta tribe of Texas, the traditional Kickapoo tribe of Texas and the Ysleta del Sur Pueblo.

While seeking community and advice for his business, Smith began traveling to Oklahoma, attending events and meetings with the state’s American Indian Chamber of Commerce, noticing subtle differences in the the way Oklahoma and Texas handled business. While Texas noted its minority spending, it did not show how many native-owned businesses it had.

A 2021 report from the Office of Advocacy of the U.S. Small Business Administration noted that there are 11,539 native-owned small businesses in Texas, representing less than 0.5 percent of total businesses in the United States. ‘State. In comparison, in Texas, 1.1% of the population identifies as uniquely American Indian and / or Alaskan native, while 1.8% identifies as native and of another race.

Smith decided to start his own organization in Texas. She partnered with the City of Dallas to form NABA and hosted its first event, expecting 150 attendees. Over 300 people from Aboriginal-owned businesses, corporations and purchasing departments attended.

â€œIt really showed that there was the need and the interest and the desire here,â€ Smith said.

Today, with dozens of members from various industries across the country, and with high demand for a Houston chapter, Smith is thrilled with the expansion. Houston’s ports and its diverse and international community have been a major draw for native-owned businesses, including those in Oklahoma, and with the American Indian Center in Houston – a resource for local Indigenous peoples – c was a natural decision, she said.

But Houston – like the United States as a whole – still has a lot of work to do when it comes to native-owned businesses, Smith and Donaldson said.

In March 2016, U.S. District Judge Gray H. Miller ruled that the Houston Office of Opportunity Affairs could not label Native American-owned businesses as â€œminority business venturesâ€ in its construction program, which under -treat these companies for projects funded by the city. Such a qualification would also list companies in a disparity survey conducted at least every five years and track information, such as funding granted and obstacles faced by people. Miller noted that there was not “sufficient evidence of discrimination against Native American-owned businesses” at the time.

The study by consultancy firm NERA, noted in court documents, said that although Native American-owned businesses in Houston were being used at a higher rate than expected in the city’s construction contracts, a large portion work was done by two Aboriginal-owned businesses. “Without these two companies, the Native American utilization rate would drop dramatically, resulting in a statistically significant disparity ratio,” the report said..

In 2012, the city carried out a study that qualified Native Americans as minorities. He noted that native-owned businesses make up about 1.7% of all construction companies in Texas, but earned less than 1% of all sales and revenue.

The purchasing power of Native Americans, however, increased 67% between 2010 and 2020, according to the University of Georgia’s Multicultural Economy report. In 2020, Texas had the third largest Native American market, with $ 12 billion. The Houston Business Journal also ranked three large native-owned businesses in its list of the 20 largest minority-owned businesses.

â€œWe are in the most inclusive city in the country. Why can’t we be included in this disparity study? Johnson asked.

Smith hopes the association can help change that by considering the many Indigenous businesses the city owns but has yet to discover. NABA has since met with officials in Houston to improve representation and inclusion of native-owned businesses, Donaldson said.

â€œWithout resources and with these one-off companies that don’t have this information, there isn’t a lot of voice. But now we can come back and say, â€œHey, here we are,â€ Smith said. “This is why (NABA is) important, so that we can have a voice.”

Although the pandemic has slowed some of the association’s growth and halted in-person events, Smith said NABA took the opportunity to host virtual events to connect with members across the country. The association is gearing up for more events over the next year and plans to expand its reach through partnerships with the Native American Chambers of Commerce in Oklahoma and Louisiana, as well as the American Indian. Houston Center.

â€œWe just really want to create that awareness and that advocacy for aboriginal businesses and be this resource to know that aboriginal businesses are here,â€ Smith said. “We want to have the opportunity to be heard, and I hope that, through all of this, the association will serve as an opportunity to educate so that the natives are thought of all year round, not just during the Month of Amerindian heritage or Indigenous Peoples Day. â€