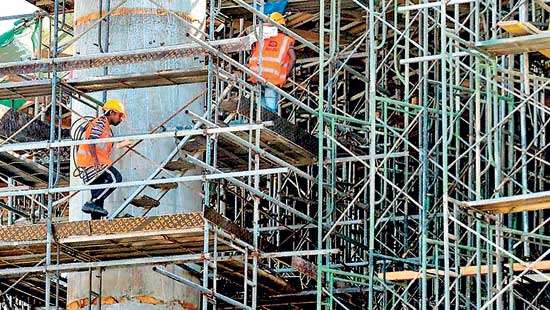 
At present, the total of outstanding payments to construction contractors in the roads, buildings and water supply sectors alone stands at almost Rs 100 billion.

The Sri Lanka Chamber of Industry (CCI), which is the supreme representative body of all those engaged in the construction industry, anticipates that with the current economic crisis and due to several factors having a debilitating impact , over 100,000 jobs will be lost in the next 3 months unless immediate corrective action is taken.

In the past, the construction industry contributed an average of 8-10% to GDP. However, due to the negative impacts in 2019 and 2020, the contribution to GDP was only 7.4% and 6.2% respectively.
In addition, this sector provided jobs for 650,000 direct and 325,000 indirect. As such, it should be seen as an integral growth sector that should be prioritized for economic recovery, especially during the recession we currently find ourselves in.

At present, the total of outstanding payments to construction contractors in the roads, buildings and water supply sectors alone stands at almost Rs 100 billion. When other sectors are taken into account, it will be more than that. In order to ease the burden on the industry, the government is requested to make expeditious arrangements to settle these outstanding payments by the RDA, Ministry of Education, UDA and NWS&DB as a matter of urgency.

With the free floating of the Rupee, the exchange rate has now risen to 340.00 Rupees per 1 US Dollar. In December 2020 and December 2021, it was Rs 186.40 and Rs 203.00 respectively. Thus, an increase of 82.4%.
Since nearly 70% of construction materials in buildings and other engineering constructions and 60% of road projects are imported, the impact of this will be to increase construction costs by at least another 60%.

Moreover, the price of diesel which was Rs.121.00 in December 2021 is now Rs.289.00. It has increased by 138.8% over the last 4 months. This increase will cause the overall construction costs to increase further by an additional 5%.

CCI acknowledges and appreciates the Cabinet’s decision for the progressive solution to apply the Construction Industry Development Authority (CIDA) price escalation formula up to an upper limit of 20% of the amount of the contract for contracts longer than 3 months which have excluded the price revision clause.

However, the CCI notes with regret that some state bodies are reluctant to offer this relief to the full extent to entrepreneurs. The ICC therefore calls on the Ministry of Finance to communicate this Cabinet decision to all public companies via a public finance circular, as the industry urgently needs this relief.

A common complaint is that CIDA’s price indices do not reflect real market prices. Although CIDA is in the process of reviewing the price escalation formula and its responsiveness to current market conditions, this exercise will take several months and once finalized will only apply to future work. As an interim measure, the following relief is proposed.

(i) immediately close the gap created by the formula, by not properly taking into account transport costs, by granting a 5% increase in the contract price in compensation for the sharp increase in the price of fuel;

(ii) To cover the difference in fluctuation of the dollar on current CIF prices, in particular for mechanical, electrical and plumbing (MEP) items, and any other items which are not reasonably covered by the indexing formula of CIDA award.

In the countries where statistics are available, it can be seen that very often construction companies are at the top of the bankruptcies. This is due to the many variables of construction projects with different site conditions, large number of different materials needed, higher exposure to weather, operation with low profit margins (typically 5%), inability to claim fully price increases and the nomadic nature of the workforce. .

Therefore, it is very important that timely payments for work performed are received. It is observed that most construction companies go bankrupt not because of a lack of profitability, but because of cash flow problems. In the current situation with unprecedented increases in material prices, exchange rates and bank interest rates, the need to recoup cost increases and timely payments need not be overstated.

Act similar to S’pore
As such, CCI would like to urge the introduction of a “Building and Construction Industry Payment Security Act” similar to the law in Singapore. This law in Singapore even provided the legal framework for arbitration and for enforcing arbitration decisions. This will also fill a gap that currently prevails in the adjudication process.
The shortage of construction materials due to import restrictions and difficulties in opening letters of credit due to the foreign exchange crisis has a serious impact on the completion of development projects.

Importers of materials and also manufacturers of construction materials such as cement or steel etc. face the dilemma of correctly assessing the cost when importing raw materials on deferred L/Cs because at the time of L/C settlement, the cost in rupees would have increased more than expected.

Very often, at the time of settlement of the letter of credit, the imported materials and manufactured items would already have been fully sold due to a hungry market and any additional cost due to exchange rate fluctuation will be a loss.
The new Secretary of the Ministry of Finance has indicated that the government will be forced to suspend capital works for at least a year. Perhaps the government has no choice given the huge budget deficit, IMF curbs on money printing and the inability to free up foreign exchange for construction sector imports.
However, CCI wishes to propose that overseas funded projects proceed without interruption. In fact, it will be prudent to have a mechanism to accelerate these projects to improve the inflow of foreign currency from them.

On the other hand, locally funded projects without a satisfactory ERR could be suspended or stopped altogether. However, suspending locally funded projects that have already started will have practical and legal issues. Government authorities will need to negotiate and mutually agree to these on a reasonable basis.
For locally funded projects whose continuation is deemed important, the ICC would like to propose the establishment of a line of credit of approximately US$100 million to cover imports. To properly manage disbursements on this line of credit, the CCI is ready to help by setting up a mechanism to monitor project needs and make recommendations to the Ministry of Finance.

It is observed that many projects have been and are launched at the whims and whims of politicians and senior civil servants, without any regard for the TAR. There are many examples of such projects that have led us to the current currency crisis.

As such, it is proposed that all future development projects shall only commence on the recommendation of an appointed Technical Review Committee with mandatory representation from CCI, which is established by an Act of Parliament.

Policy rate impact
The highest policy rate increases ever recently announced by the Central Bank will significantly increase interest rates on all facilities such as bonds and guarantees, overdrafts, term loans and corporate leases, including construction companies. The Central Bank should ensure that banks do not raise rates on already approved facilities, but only on new facilities. Additionally, since raising the policy rate could be a short-term measure, CCI would like to propose that interest rates on long-term home loans not be increased.

As such, the CCI wishes to request that the moratorium on loans taken out by construction companies and property developers be extended on the same basis until December 31, 2022.

CCI would like to advise that unless the government takes serious note of the situation and immediately takes the necessary corrective measures, a large scale reduction in the construction sector is inevitable as the majority of employees in the construction sector are recruited on a project basis. If this happens, the total number of jobs lost could exceed 100,000.
(The author is the General Secretary/CEO of the Chamber of Construction
Sri Lanka Industry)