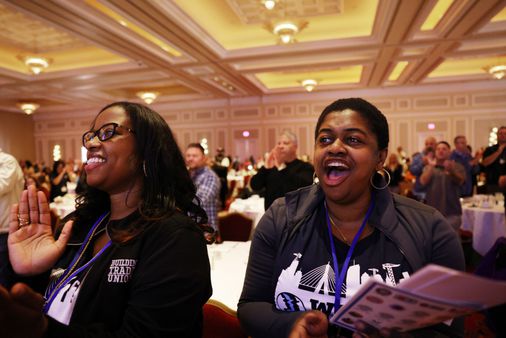 Hundreds of women in the construction industry gather for a conference

She was among hundreds of women who gathered at Encore Boston Harbor on Saturday for a one-day women’s conference. who belong to various unions and are employed in the construction industry. The inaugural event, called Women Build Boston, was hosted by the Greater Boston Building Trades Unions and drew approximately 700 attendees.

US Secretary of Labor Martin J. Walsh and State Attorney General Maura Healey, the Democratic nominee in this year’s gubernatorial campaign, were among the speakers who addressed the rally. A video of remarks previously recorded by US Representative Ayanna Pressley was also released.

In Massachusetts, women make up 10% of construction apprentices, triple the national average, according to the Policy Group on Tradeswomen’s Issues.

The conference site was also a nod to the growing number of women in the local construction industry. Nearly 500 women helped build the $1.6 billion casino, the most women to participate in a construction project in U.S. history, organizers said.

“A lot of these women are now companions, which means they get full benefits and full pay,” he said in an interview. “It’s really amazing to see.”

Despite the progress, women still face challenges in the field of construction, which has long been dominated by men. Sexism and access to childcare were among the concerns cited by women at the conference.

Carbone said on a construction site that you can be told that “you don’t need work boots. You need an apron and a cookie sheet.

Other times, the sexism is more subtle, she says.

“That’s what it’s often like to be the only woman on the job, to be seen as less capable, less smart, a bit invisible,” Carbone said.

“A lot of women start working at 6am, sometimes 5am, and they need that outlet so they can drop their kids off in a safe environment,” she said.

Desalia Gomes, host of the event and a member of Local 4 of the International Union of Elevator Builders, said conference organizers want women to see the construction trades as a viable career.

“It’s a space that’s been created that invites you to come in so you can make sure you’re in the union and earning those salaries and having a career that’s sustainable, but also fulfilling,” he said. she declared. .

Before joining the elevator union, Gomes said she worked as a teacher but struggled to support herself financially.

In 2019, she said she completed the Building Pathways program and then joined her union last year.

“It changed my life,” she said.

Suzy Depina-Correia, 27, of Dorchester, is a second-year apprentice with the International Brotherhood of Electrical Workers, Local 103.

She said she trained as an electrician after working as a counselor at the Perkins School for the Blind. The higher wages she earns as a union electrician have made it easier for her to support herself and her mother, who has a disability, Depina-Correia said.

“I can finally afford a good place for my mom and me,” said Depina-Correia, who got emotional while talking about her job.

Qiana Johnson, 40, from Dorchester, said she joined the International Union of Operations Engineers, Local 4, in 2007.

Women bring compassion and care to construction sites, she said.