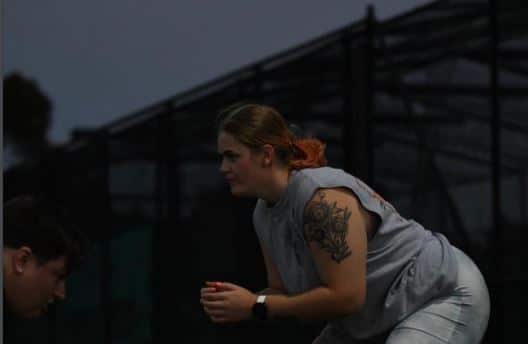 Tanisha Bratusa may still be new to the world of grilling, but has earned an unexpected opportunity to represent Australia at the upcoming International Federation of American Football Federation, IFAF World Championships.

Bratusa started playing grill this year after seeing her boyfriend Tyrell playing and wanting to try it herself.

Taking an immediate liking to the sport, Bratusa comfortably learned the offensive left tackle position as a member of the Victoria Eagles.

She soon had the opportunity to play at international level, being named to the Outback women’s team, with which she will travel to Finland in July for the championships.

Australia is one of eight nations competing alongside Finland, USA, Canada, Mexico, Sweden, Great Britain and Germany. In Finland, Australia will play four matches against four of the competing nations.

“There’s going to be a training camp a week before I fly to Finland, but several coaches have told me I belong on the plane, which is super exciting,” Bratusa said.

Before meeting her boyfriend, Bratusa admitted that she had little understanding of sports, and in fact, she didn’t particularly like playing sports growing up.

“I didn’t even know this sport existed in Australia,” she said.

“Throughout high school, I was the kid who always had a sick note for sports; I had no interest in it. I left in ninth grade and did virtual studies, and I started doing weight training…but that’s the only sport I’ve ever really done.

The total cost per player for the championships is $8500, which must be fully funded by the players as grilling is considered a minor sport in Australia.

Bratusa hopes the community can help make her trip possible through donations.

“I’m so proud and excited to have this opportunity, and I look forward to representing my family, my friends, my city and my country with pride,” she said.

“Any donation, large or small, will be greatly appreciated, and I will also be looking for sponsors to help cover this cost, so the amount I need may drop.”

The championships will take place in Vantaa, Finland, from July 28 to August 8.

Bratusa supporters have set up a GoFundMe page to support his journey, and people can donate by visiting gofund.me/03b9f850.

A link to contact Bratusa can also be found on the GoFundMe page for those wishing to discuss sponsorship options.

New houses are in high demand, but obtaining the financing to buy one.