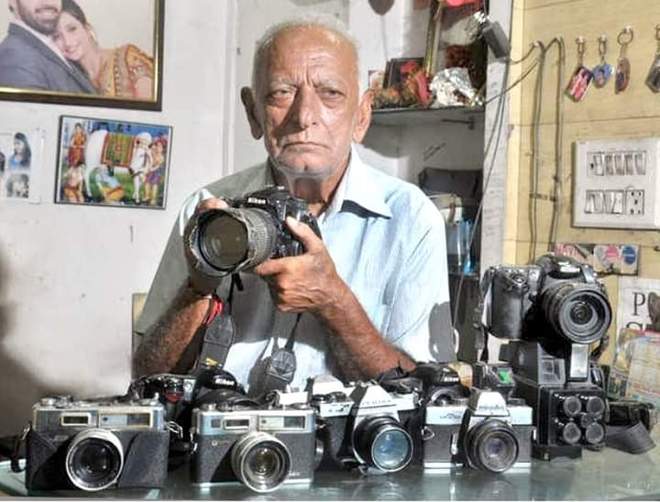 Jalandhar: After taking photos at the scene of the incident even at the age of 81, Pyare Lal (84), one of the city’s oldest photographers, breathed his last at his Shaheed Udham residence Singh Nagar this afternoon. His sons Naveen Sagar and Munish Sagar have said their father has not been doing well for almost two and a half years. After being a photojournalist for an extended period of 66 years, Pyare Lal entered the field at the age of 15. He had captured some rare photos of former CM Partap Singh Kairon and covered events like Kapoori Morcha in Patiala and the arrest of activist Jarnail Singh Bhindranwale. He is survived by his wife Saroj and his two sons. His last rites were performed at the cremation site of Harnamdasspura. TNS

Hoshiarpur: District police arrested two smugglers on Monday evening with a huge amount of sedative drugs and injections. Garhshankar police arrested Lakhi Singh, a resident of Dagham near the village of Chauhra on the road to Banga while on patrol on Monday evening and collected 100 sedative pills from him. Meanwhile, Mehtiana police seized a large number of injections of sedatives and syringes from Kuldeep Singh Deepa, aka Mukhliana. The accused was arrested. Separate cases under the NDPS Act were filed against the accused. CO

A man from K’thala wins a fitness competition

Kapurthala: City-based fitness enthusiast Manpreet Singh (29) won the Iron Man of Punjab title at the recent International Fitness Federation (IFF) bodybuilding and male physique competition. FIF India President Harminder Dulowal who is also known as a vegetarian bodybuilder said that they did not charge any fees to the participants, instead they handed out cash prizes, trophies, certificates and medals to the winners. Manpreet Singh received a cash prize of Rs 11,000, followed by Rs 5,000, Rs 4,000, Rs 3,000, Rs 2,000 and Rs 1,000 to the finalists. TNS

Can the construction industry keep the promises of the infrastructure bill?

How the Magnuson-Stevens Act shaped the Hawaiian fishing industry