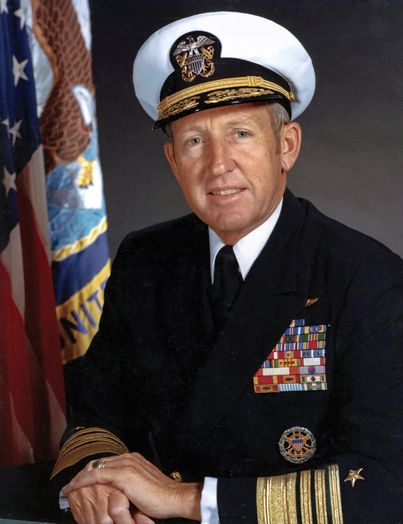 “Today the Navy mourns alongside the family and friends of Admiral Thomas B. Hayward as we celebrate his legacy and his service to our nation. He was a sailor, a warrior, a man of honor and Integrity, who served as Chief of Naval Operations from 1978 to 1982. As CNO, he ably led the Navy through difficult times after the end of the Vietnam War and the transition to an all-volunteer force. Faced with both the Iranian hostage crisis of 1979 and renewed Soviet competition in the midst of the Cold War, he rebuilt the Navy’s combat readiness through large investments in personnel and equipment and restored the “Pride in the Navy”. Focused on operational superiority, he prioritized building sophisticated capabilities to support a comprehensive and offensive maritime strategy. He enlisted in the Navy during World War II and, as a naval aviator, flew combat missions in Korea and Vietnam. We have truly lost a great leader and shipmate. We are grateful for your leadership, your mentorship and your commitment to our Navy and our nation. Fair winds and following seas, sir.

Below is Hayward’s biography:

Hayward was born in Glendale, California on May 3, 1924, the son of Mr. and Mrs. E. Payson Hayward. A native of California, Admiral Hayward attended Glendale Junior College and Occidental College in Los Angeles, and in 1943 was commissioned as a Naval Aviation Cadet in the U.S. Naval Reserve V-5 program. He entered the US Naval Academy in 1944 by appointment from the State of California and upon graduation was commissioned as an ensign in the US Navy on June 6, 1947.

After graduating from the United States Naval Academy, he served in the aircraft carrier USS Antietam until being detached in September 1948 for flight training at Naval Air Station Pensacola, Pennsylvania. Florida. Designated a naval aviator on July 26, 1950, he was assigned to Fighter Squadron 51. Within this squadron, he took part in combat operations in Korea, boarded the aircraft carrier USS Essex (CV 9), then in USS Valley Forge (CVA 45).

In January 1954, he reported for test pilot training at the Naval Air Test Center, Patuxent River, Maryland, and upon completion of training remained there as a test pilot and coordinator of project. He then attended the Air Safety Officers School at the University of Southern California at Los Angeles, after which he served with the Third All-Weather Fighter Squadron. In August 1958 he reported for training at the Naval War College, Newport, Rhode Island, and in December 1959 joined Fighter Squadron 211 as executive officer. In July 1961, he became administrative assistant at the Navy Secretariat. He was then attached to Fighter Squadron 103 in December 1963, as an executive officer and later as a commander. In July 1965, he took command of Attack Carrier Air Wing 10 which was deployed in the Mediterranean aboard the aircraft carrier USS Shangri-La (CVA 38), then in Southeast Asia during the Vietnam conflict aboard of the aircraft carrier USS Intrepid. (CVS11).

From August 1966 to August 1967 he was a student at the National War College in Washington, DC, and in 1967 earned a Master of Science in International Affairs from George Washington University. He then served as commanding officer of the USS Graffias (AF 29) operating off the coast of Vietnam. In August 1968, he was appointed Executive Assistant and Assistant Undersecretary of the Navy.

In December 1969, he assumed command of the attack carrier USS America (CVA 66), deploying to the 7th Fleet as flagship to Commander Task Force 77. Promoted to Rear Admiral in November 1970, he visited Hawaii as Commander, Sea Frontier and Commander, 14th Naval District. He was assigned additional duties as Commander, Fleet Air, Hawaii, and Commander, Manned Spacecraft Recovery Forces, Pacific. He became director of the Navy Department’s Office of Program Evaluation in December 1971, and on April 26, 1973, was promoted to vice admiral and appointed director of Navy Program Planning in the Office of the Chief of Naval Operations. . On June 14, 1975, he assumed command of the US 7th Fleet in the Western Pacific and embarked aboard the guided-missile cruiser USS Oklahoma City. Promoted to the rank of Admiral, he assumed the duties of Commander-in-Chief of the United States Pacific Fleet on August 12, 1976.