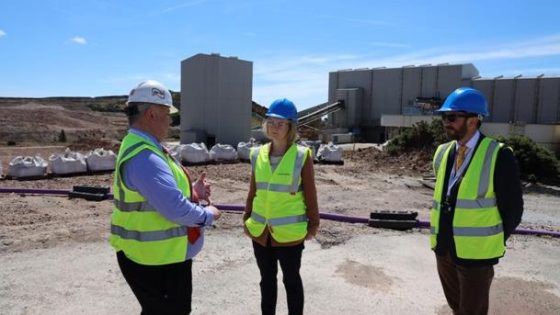 Clearance work begins ahead of potential reopening of Hemerdon mine

Tungsten West has made progress on its plans to restart operations at the Hemerdon tungsten and tin mine next year, including signing a letter of intent with drilling and blasting contractor EPC Groupe.

British mining development company Tungsten West is focused on restarting production at the Hemerdon mine on the outskirts of Plymouth in Devon.

In July, the company announced a new development plan for the mine, aimed at optimizing crushing, ore sorting and plant utilization to help reduce capital expenditures and fuel and oil consumption. project electricity. It was created in response to the global energy crisis and rising fuel and building material costs. The company had previously suspended plans to reopen the mine due to rising costs and the falling market value of tungsten.

At the time, the Tungsten West Board of Directors gave approval to proceed with the detailed engineering design and to commence construction of the Hemerdon project with immediate effect.

In its latest business update, the mining company said it had made further improvements to the plan. It expects to receive a construction schedule from its engineering, procurement and construction contractor, Fairport Engineering, by the end of the month.

In the meantime, clearance works have started on the site and orders for equipment have been placed.

The company has also signed a letter of intent with EPC Groupe for the provision of drilling and blasting services during the restart of mining operations.

Tungsten West has also identified a 20 ha site within 1.2 km of Hemerdon which is suitable for the installation of 9-12 MW of solar power generation. It has commissioned a scoping study which will be followed by a separate feasibility study to develop this project.

Three potential sites for the installation of wind turbines have also been identified within the limits of the mine, on land belonging to the company. An exploratory study has been commissioned on the feasibility of building a dedicated wind turbine with a private connection to the treatment plant.

In addition, the earthworks for the installation of the new ore sorting building have been completed.

Thompson commented: “It was a great pleasure and honor to welcome the Prime Minister on site and to have the opportunity to explain and discuss the crucial role of tungsten to key UK industries including defence, oil and gas production and automotive and aerospace manufacturing. sectors.

“Discussions with the government on the points raised are ongoing, both directly and through the Critical Minerals Association, in the hope that the requested policy assistance will materialize.”

Tungsten West owns 100% of the Hemerdon mine – formerly known as the Drakelands mine – which it purchased in 2019. It was a tungsten and tin mine in operation between August 2015 and October 2018 under the former operator Wolf Minerals (United Kingdom).

The mine site still includes a partially developed open pit, a complete processing plant, an integrated mine waste management facility, workshops, administrative offices and all infrastructure associated with the mine site.

The mine is also currently the third largest tungsten resource in the world.