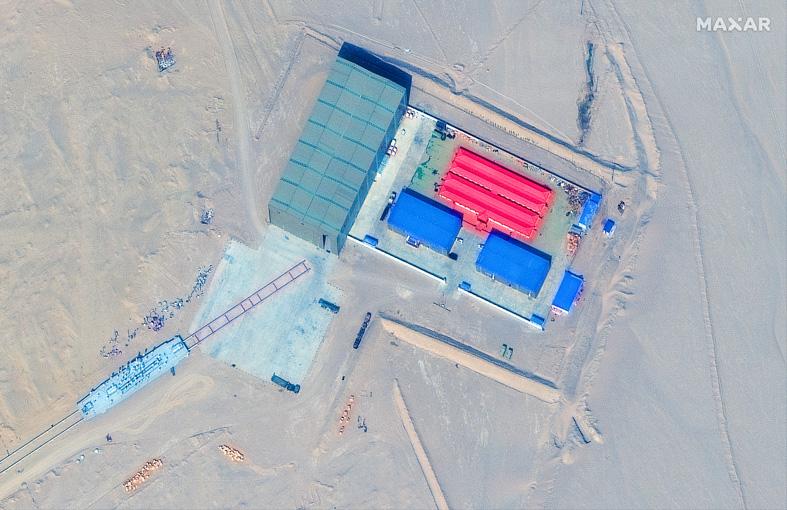 China uses scale models of US warships for training

“CARRIER KILLER”?
Clear satellite images, a sign that China is trying to show what its missile forces can do, show targets shaped like a US aircraft carrier and two destroyers

Satellite images show targets in the form of an aircraft carrier and two Arleigh Burke-class guided missile destroyers at a test facility in the Taklamakan Desert of Xinjiang, the news website reported. ‘US Naval Institute.

Both types of ships are deployed by the U.S. 7th Fleet, which patrols the western Pacific, including the waters around Taiwan.

The images were taken last month by Maxar Technologies Inc, a U.S. company with more than 80 company-built satellites in orbit.

The facility also has two rectangular targets approximately 75m long that are mounted on rails, Maxar said in an emailed statement to Bloomberg News yesterday.

The site is clear for satellites, a sign that Beijing is trying to show Washington what its missile forces can do.

In August last year, the Chinese military carried out a coordinated test launch of the DF-21D carrier killer missiles in the South China Sea, an action the former head of the US Indo command -Pacific later told US Admiral Phil Davidson in the Senate. sign was intended as an â€œunequivocal messageâ€.

The DF-21D is at the heart of China’s strategy to deter military action off its eastern coast by threatening to destroy the main sources of US power projection in the region, its carrier groups.

Then-Naval Intelligence Vice Admiral Jack Dorsett told reporters in January 2011 that the Pentagon underestimated the speed at which China had developed and was commissioning the DF-21D.

Sino-US relations have quietly improved in recent months, but the two countries are fighting over Taiwan and concern is growing in Washington over Beijing’s nuclear arsenal.

In a sign of heated rhetoric about Taiwan, Chinese state media last week had to tame online speculation about a possible war.

The Pentagon has expressed concern that China is expanding its nuclear weapons capabilities faster than previously believed. Many members of the U.S. military establishment are also concerned about China’s investments in advanced missile technology, with U.S. General Mark Milley, the top military officer in uniform, on Oct. 27 calling the systems tests of hypersonic weapons reported by China of “great concern”.

Comments will be moderated. Keep comments relevant to the article. Comments containing abusive and obscene language, personal attacks of any kind or promotion will be removed and the user banned. The final decision will be at the discretion of the Taipei Times.