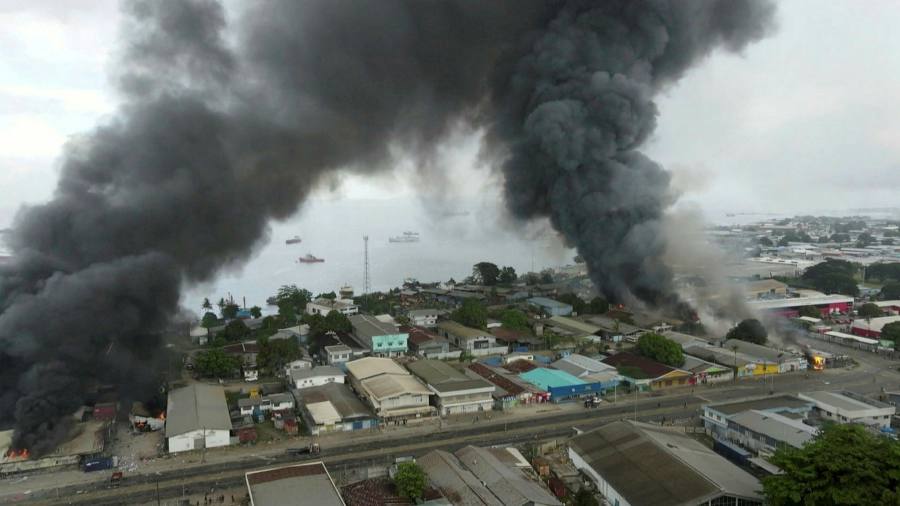 People started approaching him to ask him to make “some positive comments about China in exchange for a piece of land,” he said, refusing to identify the interlocutors.

Kenilorea alleges that the reason for the offers quickly became clear. After the 2019 elections, the four-time Prime Minister of the Solomons, Manasseh Sogavare, transferred diplomatic recognition from Taiwan to China, severing ties with the island after 36 years.

The Solomons are just one of the tiny but strategically important nations in the Pacific that are caught in growing geopolitical competition over whether to maintain diplomatic relations with Beijing or Taiwan.

As the same contest unfolds in other regions – most recently Nicaragua signaled earlier this month that it would recognize China – the problem in the Pacific is mingling with internal Solomons conflicts in Samoa for fuel tensions and, in some cases, violence.

In the Solomons, Australia and neighboring countries have sent troops to help restore order after three people were killed in riots and arson last month. The unrest followed protests led by Daniel Suidani, premier of Solomon Islands’ most populous island, Malaita, against government recognition of China, but analysts said they were rooted in ethnic disputes and economic discontent.

On Thursday, the complete change in the country’s strategic direction was highlighted. As Canberra confirmed that most of its contingent of peacekeepers in the country were to be withdrawn, China offered its own support. Zhao Lijian, spokesman for China’s Foreign Ministry, said an advisory group of “ad hoc” police and tactical equipment were on their way to the country.

“They will be arriving soon to play a constructive role in building the capacity of the local police,” he said.

In total, 10 Pacific countries recognize China and only four Taiwan, which Beijing says is part of its territory and not a sovereign nation and therefore should not receive diplomatic recognition. Taipei and Beijing have both offered rewards, such as generous increases in aid, to countries that switch allegiances.

At the root of the tensions is the growing rivalry between China and the United States, which backs Taiwan. Xi Jinping has increased China’s interest in the South Pacific, whose countries collectively control 28% of the world’s sovereign ocean territory, including important trade routes. Most of the islands were battlegrounds during WWII.

“[The] a broader model of strategic rivalry between America and China [is] over which of them will be the main power in East Asia and the Western Pacific in the decades to come, the stakes are therefore very high, â€said Hugh White, Emeritus Professor of Strategic Studies at the Australian National University.

China has stepped up its aid, with grants peaking at $ 145 million in 2018, according to the Lowy Institute, an Australia-based think tank. US fears Beijing will win access to deep water ports or other infrastructure in the region of potential military utility.

“If the People’s Liberation Army Navy had a port on which it could rely in the region, it would allow it to deny the peaceful access of the US naval fleet to the west coast of the United States to the east coast of Australia, â€said a senior Australian intelligence official.

The small nation of Kiribati, which also moved its ties from Taiwan to China in 2019, this year announced Beijing-backed plans to upgrade one of its airstrips for civilian use.

Further south in Samoa, Prime Minister Fiame Naomi Mataafa this year ended the 22-year reign of his predecessor Tuilaepa Sailele Malielegaoi after his party campaigned against the construction of two Chinese-backed ports in the country.

Its supporters argued that the ports were unnecessary and would burden the country with more debt. Under Tuilaepa, this reached half of Samoa’s gross domestic product, with China being the main creditor.

â€œThe level of debt is a concern and maybe not just for China, but for [any] a source, â€Fiame said in an interview with the Financial Times.

But like most islands in the Pacific, the local politics behind Fiame’s victory were more complicated than the campaign against Chinese debt suggested.

Fiame was Deputy Prime Minister before joining the opposition. Belonging to one of the four highest families of rulers in the country – in fact, royalty – she was probably the only person capable of toppling the powerful prime minister and his party, analysts have said.

His campaign was also funded by remittances from overseas Samoans, known to be more wary of Chinese aid to their homeland.

While opposition to China grabbed the headlines in the Solomons, Malaita and Guadalcanal, the largest island by land area and second largest by population, have a history of ethnic strife fueled by lack of opportunities for them. youth. Protesters, upset that mainland Chinese companies were entering industries such as logging and mining, often targeted traders of Chinese descent.

According to a Western diplomat, Solomons Prime Minister Sogavare was forced to forgo recognition of Taiwan in order to secure the loyalty of some pro-Chinese parliamentarians from Guadalcanal and secure a majority in parliament over a Malaitan-led group.

“[The] The price for their support was supposed to be that Sogavare transferred recognition from Taiwan to China, â€the diplomat said.

MPs’ motives for supporting China were less clear, but recognition could unlock Chinese investment, the diplomat said. Unsustainable and illegal logging accounts for nearly two-thirds of the country’s exports, most of which end up in mainland China, according to environmental group Global Witness.

Kenilorea, who is the son of the Solomons’ first prime minister and chairman of the parliament’s foreign relations committee, said the change in recognition was announced as official policy before the body had a chance to complete its consultations.

A report on the matter from a task force specially appointed by the Prime Minister and obtained by the FT, included a recommendation that any changes “must” take place before October 1, 2019 – the 70th anniversary of the People’s Republic of China. .

Sogavare has denied accusations of corrupt payments and rejected a motion for parliamentary censure last week, denouncing what he called an “attempted illegal coup instigated by agents of Taiwan.” Malaita responded by announcing a self-determination poll, but analysts doubted he would succeed at the polls.

Despite the setbacks, Taipei and Washington retain some support in the Pacific. This year, the Federated States of Micronesia, which recognizes China, agreed to host a US military base on its territory. In addition, more than six Pacific territories, including American Samoa and New Caledonia, have defense or political links with the United States or France.

But in the long run, Washington will struggle to overcome growing Chinese influence in the region, analysts say.

“China has a lot to offer the Pacific Islands economically, both as a market and a source of aid, and this gives China opportunities to influence,” White said of the ANU.