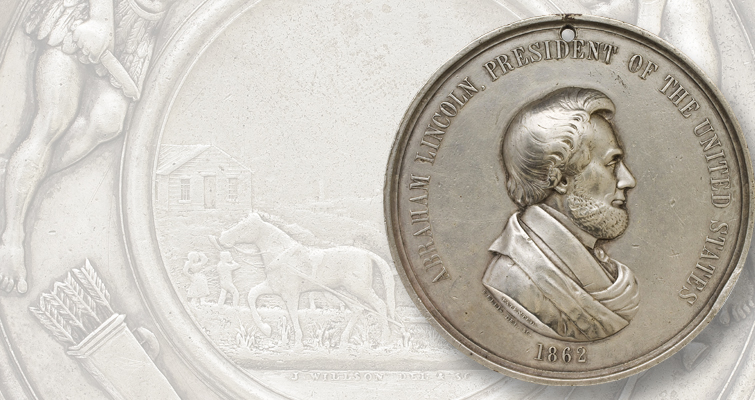 ANS will repatriate the peace medal held since 1915

The American Numismatic Society is seeking to repatriate a silver Abraham Lincoln Indian Peace Medal struck by the United States Mint that has been in the society’s collection since 1915 after it was removed three years prior from the site of a cemetery in the Pawnee Nation in Nebraska.

The obverse of the 1862 medal features a portrait to the right of Lincoln by sculptor and medalist Salathiel Ellis, and the reverse is designed by Joseph Willson.

The reverse has a central vignette of a rural scene with an Indian plowing and with children in the background playing baseball, as well as a school, church, etc. The head of a Native American woman appears below.

The National Park Service on behalf of the ANS posted a notice on the Federal Register June 27 of the society’s intention to repatriate the medal to the Pawnee Nation of Oklahoma.

Any competing claims have until July 27 to be filed.

AG Parker reported in the March 1913 edition of the Journal of the American Numismatic Association, The numismatistof the discovery circa 1912 in Genoa, Nebraska, by village entrepreneur John Vaught, of the 3-foot-deep medal while repairing water pipes.

Parker wrote that the Lincoln Medal is believed to have been buried between 1862 and 1868 with its owner, a Pawnee Indian chief. The obverse of the coin has a slight dent near the edge where it was hit by Vaught’s shovel.